It takes courage to step into the ring and fight an opponent. If you doubt me, try it.

Well I grew up doing Karate and Taekwondo. But I last competed when I was 17 or 18. I stopped training for more than 20 years. A few years ago, I realized that I missed it badly – training and sparring. I decided to start keeping fit again. There was no Taekwondo club near me, so I joined a boxing and Thai-Boxing/Kick-boxing Club near my house (Challange Club Sachsenhausen).

When it came to Thai- or Kick-boxing I could hold my own a little. But I was woeful at Boxing and got regularly and properly beaten during training and sparring. But I liked the exercise of it and the fun of it, and it helped me gradually regain a little of my condition and stamina and get somewhat back into shape. I also gradually got a little better at Boxing, although really Taekwondo is still my natural fighting art.

Anyway, 6 weeks ago, Udo the manager of Challenge Club asked me if I would be interested in fighting (Boxing) at the next Fight Night. I was like, “Hello. I’m 44. My fighting days are long over. Besides that, I’ve never been in a Boxing fight before.” But then I thought about it and said “Why Not? Might be fun.” and I agreed, and I henceforth upped my training schedule.

And then, just when I thought I was in some sort of shape, in the week of the fight, disaster struck. I came down with the flu. 3 days! It knocked me down until the day right before the fight. I couldn’t work, couldn’t train, nothing! Had to go see the doctor. My goodness. I almost called off the fight, but I told myself to wait until the morning of the fight and see how I felt.

When I woke up that morning, I felt weak but a bit better – it’s incredible how much muscle mass and stamina you can lose from just 3 days of illness. But I decided, “My man, you grew up fighting. Just go into the ring and fight, full stop. No excuses.” I know the jitters before a fight. I know the nervousness. I know everything. They are my friends. When I feel them, I know I am in good company. So, really, I was good. No shaking.

But I knew nothing about my opponent, not his name or age or size or if he fought right- or left-handed. I just heard he weighed 100kg (I weigh 95kg), so that was OK. Well, I got to the venue (Challenge Club Offenbach), our stats were on the wall in the dressing room. I saw he was 22 years old. I was like, Okay now. Half my age and probably twice as strong and fit. No yawah. When you enter trouble, enter it with open eyes, strongly and without fear.

So I warmed up in the dressing room with my coach Manuel “Manu” Moreno, an ex-professional and the best Coach in the world. You hear his voice in the video throughout the fight, calming talking me through. And my friend and former junior world champion in Muay-Thai Ibra Senghor came into the dressing room and gave me some tips (PS – you can catch both of them in the video of my song Music Makes Me High which I did I think 2 years ago now https://youtu.be/hFjzvqCb-Po ). My pal Marlin was also in the crowd, rooting from ringside, and that meant a lot to me.

(Btw: Coach Manu, 60 years and still going strong, also fought an exhibition-style Oldies Fight later that night and showed the crowd that he’s still got the moves and the boxing intelligence).

Anyways, next issue: I was told the fight would be without head gear. Got into the ring and saw the big young man wearing head gear. Hm. That’s a disadvantage to me, because he can take my punches and keep on fighting as if nothing happened (which indeed happened) – he would just re-arrange his head gear and keep on boxing; but if he hammers my head I’m sure gonna feel it. Ibra was like, “Well, you have to hit the front of his face, and his nose, ‘cause he won’t feel anything else.” And he kept on shouting it throughout the fight.

It was a nice feeling, though, to be in the ring again in a proper fight (not sparring or training etc – because a real fight is SOMETHING ELSE, believe me). I felt all of my 44 years 😂. I have to think twice before I try this again. Boxing is a young man’s sport.

But I did come through. After the fight, I felt a great respect for my opponent because I know what it takes to decide to fight. And he did it and fought bravely. It takes courage to step into a ring and fight an opponent – any kind of ring in any field of Endeavour in life. If you doubt me, try it. 😉
One thing is for sure, though. I’ll never let myself fall out of shape again. 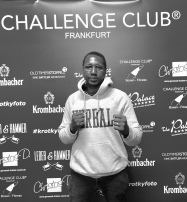