Every many generations the slate is wiped clean
You think you are there where you always have been
But most every native is a fruit of some old migrant tree
That forgot its deep roots in some distant ancient century
And some disappeared Country.

How foreign is a foreigner
In a land of foreign values
If the values of the foreign
Are native to him?

How rightful are a native’s rights
In a land of prayer and righteousness
If he claims for himself the right
To deny an unbeliever his human rights?

Democracy is a car – if you insist
That they exchange their horse for your car
How can you stop them from roughly driving the car
Like they rode their horse, out into the wild?

Religion is a house – if you insist that they
Abandon nature and make your house their home
How can you stop them from inviting their old nature
Into your eternal rigid walls?

FASSEN DID not know that the three brothers were coming from a war-torn zone. Or, rather, he knew, he just did not understand exactly what that meant. No laughter, no trust, no carefreeness, no childlike play, no joyful working from a love-filled heart – only caution, suspicion, fear, brutality, cunning, callousness. Inner deadening, a certain death. All of which they wished to reverse, to overcome now. The crisis they were fleeing from was not a war-torn hell-hole they’d left behind on another geographical part of the earth. It was the torture they carried within them all the time now, the propensities, the emptiness, the loneliness and the struggle to keep the inner child alive. It was little things that made them happy now – shared chores, small friendships, acceptance. Fassen did not really see all that. All he saw in the three young men were just three guest-workers from the camp, to be treated like everybody else.

The eldest of the three, Mugi, had the deepest eyes, depths filled with pain. Eyes that had seen things their owner wanted to forget, but knew he never would. All that was left in him was the urge to take care of his brothers in a peace-filled world.

Fassen, however, did not understand all this. He was a good, clear-minded, clear-thinking, God-fearing young man who wanted to simply do his job. He was usually one of the last of the restaurant personal to go home each night after doing the dishes down in the basement kitchen.

He could not fathom why these three new cleaners, these brothers, after sweeping and cleaning the house and grounds each night, like to come and join in doing the mountain of dishes and other kitchen utensils. Of course things went much quicker, and there was added human company, but it was a mystery to him and to his colleague, Weller, whose job it was. They stared at one another, mystified, and shook their heads.

It was Mugi who had started it first. One night, he hesitated outside the door and thought of the long walk home in the strange darkness, of all the people out there who never spoke to him and his brothers, never even looked at them, looked away, moved away, subtly, whenever they were in the vicinity; and he thought of the two men in the basement kitchen who were always polite and nice to them. And he walked in silently while they were washing up and, quietly, asked if he could help them. They happily consented, glad to have an extra pair of hands to speed up the work. Then he came again the next night, and the next, and the next.

Fassen and Weller began to wonder. Mugi hardly spoke. He listened fully, almost desperately, to all their conversations, and rocked with laughter, even if hesitantly, when they cracked their funny jokes, but he himself made hardly any contributions, or seemed not to.

And then, one night, his two brothers came along with him. Even more ready, almost desperately so too, to laugh, and willing in addition, unlike Mugi, to crack their own jokes, tell their own stories and, joining in conversations, make new friends at last.

Why did they persist in coming here every night and turning their job into a roundly, albeit effective, circus? Fassen and Weller could not understand. Might there be a hidden motive? What did they actually want?

It was Fassen who first started to get irritated, and a little suspicious, after two weeks. Very irritated! A little wary. And of the opinion that this had to stop now. He spoke with Weller about it and after a little persuasion, the younger Weller eventually agreed. So, that night when the three brothers came, they politely – to the brothers’s startled surprise – denied them their now-customary wish.

“Too many cooks spoil the broth,” Fassen said with a shrug of his shoulders, looking up briefly as he dried a tumbler, an enigmatic half-smile on his face, his gaze watchful.

Nziko and Kama, Mugi’s two younger brothers, shrugged and nodded. They quickly rationalised it – it was true anyway. They only requested to join in one last time, since they were already there, which requested was grudgingly granted.

But Mugi did not request anymore. It was not Fassen’s words that had registered with him, but the look in his eyes as he spoke. There had been no hatred or malice there, perhaps, but then there had been no love too. Only a desire for safety and order, and boundries. And this desire for safety and order, and boundries, had temporarily blinded Fassen’s inner eyes to the desperate, momentary needs of fellow human hearts, blocked his view into an appreciation of simple friendliness. Mugi recognised here a lack of understanding for and of the depths of pain within his brothers and himself, of their longing and need for love, for carefree play, for a semblace of normalness, for contact, for a place where work is laughter, just a little laughter.

And because Mugi knew that Fassen was right, in accordance with his job, position, responsibility, and level of understanding of human beings, he did not argue, nor made he any further requests. He could not, even. He felt again like a stranger. He felt again many of those silent shifting feelings he wanted to forget, but knew that he would not. He felt again that pain which one feels when one is almost understood and then betrayed, when one needs just a little shoulder to rest a little head for a little while, but finds none… he felt again the character of loneliness.

So he smiled at Fassen, and would also have smiled at Weller if Weller had not averted his young eyes; then he went outside to wait for his brothers who were still attempting to snatch a little joyousness, still seeking a little laughter, companionship and joyful work with which to cure them their sorely wounded young souls.

And he thought of all the many lonely people walking undetected on earth, singly or in groups, who have also come from war-torn zones of whatever sort, physical or psychical, or both, and more, and who carry deep pains, badly healed scars within them, which nobody understands – and he prayed for them.

And, not long after he was through with his prayer, his two brothers emerged from out of the basement, finished here, and together the three of them walked through the cold night to their tiny apartment in the camp, their home. And, as they walked, they cracked jokes and laughed.

– Che Chidi Chukwumerije.
From my collection of thoughts and short stories: 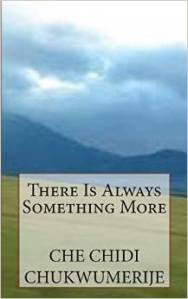