Those were the words, that was the title.

“Were we ever young?”

Neither replied the other. Each had spoken for the other.

This last poem, for some reason, was italicised from first word to last. We shall be young one day again, younger than we ever were, young as ageless eternity. YOUNG AGAIN.

Let us all grow young again
Fill the Earth with laughter
With truth, with youth –

“I want to see Tony again.”

There was a pause. But did a spell break somewhere quietly? Or were we never there?

“Do you have a telephone?” Ngozi pressed, trying to interpret Ada’s silence. It must mean something.

A spell seemed indeed to abruptly lift itself off her and, in its place, her thinking cap, invisible on her head but visible in the sudden, guarded look in her eyes, treacherous windows, descended, full of fears and cleverness and innumerable bad memories, upon her. She was suddenly appalled at herself, and the last twenty minutes swiftly took on the aspect of a fairy-tale, a dream. Had it really happened? Who was this strange woman beside whom she was sitting, sharing the intimate poems of her brother with, like old friends. She experienced the sensation of having been swiftly disarmed and intruded upon, and even, oddly, deceived.

Her head moved back a fraction of a unit of precise measurement and re-appraised Ngozi with suspicious, half-friendly, half-unfriendly, unsure eyes. Like it was in the beginning. – Yes? Who are you?

The returning silence, cold and dividing, began to mature.

Ngozi suddenly understood Ada. She smiled tenderly. Into her handbag she reached, extracted a black, silver-capped pen and then a tiny slip of blue paper. Carefully she balanced the little paper on the side of her bag and, luckily, the bus was temporarily caught in a traffic-jam at Ijaiye. The type that Lagosians call the Standstill, in contradistinction to the Go-Slow and the Hold-up.

Quickly she wrote her name and telephone number down, then wordlessly handed it over to Ada.

“That’s my office telephone number. Please tell him I said Hi.” She smiled again, then turned her head forward; then turned back again, smiling even more disarmingly and added: “and, oh, by the way… Merry Christmas – one day in arrears.”

Ngozi had turned her face away. She didn’t speak again. At the next bus-stop, Iyana-Meiran, she alighted from the bus and left a thoughtful Ada again without her presence, as it was in the beginning.

(This is the end of the excerpts. The whole  book can be obtained via Amazon) 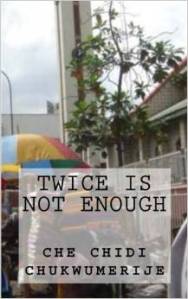